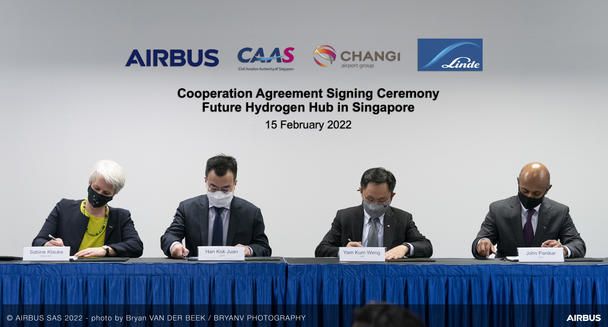 Hydrogen has quickly become the hottest topic in modern aviation. Major players in the industry are looking to expand production and infrastructure relating to the fuel as more and more corporations begin to understand the future potential of aviation’s next big fuel source. Airbus have come out swinging in that regard, with the recent news of an agreement signed between the manufacturer and Singapore’s CAAS enabling the study of a potential hydrogen fuel hub located in the busy Changi airport. The agreement, also signed by Changi Airport Group, comes off the back of the manufacturer’s similar agreement with Incheon International Airport in South Korea to explore the use of the fuel in the country’s largest airport. So, what does this all mean? Well, if plans go ahead, these airports could see hydrogen fuel cells being used in all airport operations, with the sites also being used as storage for the fuel, preparing it for use in aircraft and other operational services.

With estimations for the fuel becoming widely used in the region by 2035 spurring Airbus’ decision, it certainly seems like a step in the right direction to remedy the two major issues facing hydrogen fuel’s adoption at the moment: lack of supply and infrastructure. These plans would see the airports in question fitted with modern infrastructure specifically designed to facilitate the use of hydrogen as a fuel source. “We aim to identify architecture, technology regulations, everything we actually need to make it happen and to equip the new and existing airport terminals with hydrogen for aviation,” stated Airbus Chief Technical Officer Sabine Klauke. The project also has the support of Singapore’s government, with the country’s transport minister recently announcing plans to develop a sustainable air hub blueprint by early 2023, in order to map out the future of Singapore’s sustainable aviation industry. With the agreement signed, all four collaborating parties will set out to conduct a thorough market analysis on the projected demand and supply for hydrogen as a fuel in the industry, as well as assessing how ready the region is to adopt the fuel alongside determining the actual feasibility of making the switch from standard aviation fuel to hydrogen. This is no easy process, with huge costs running side by side with huge risk, as the project has never been attempted before. If successful, however, it should set a standard for the adoption of hydrogen in a future aviation industry, putting global aviation one step closer to de-carbonisation.