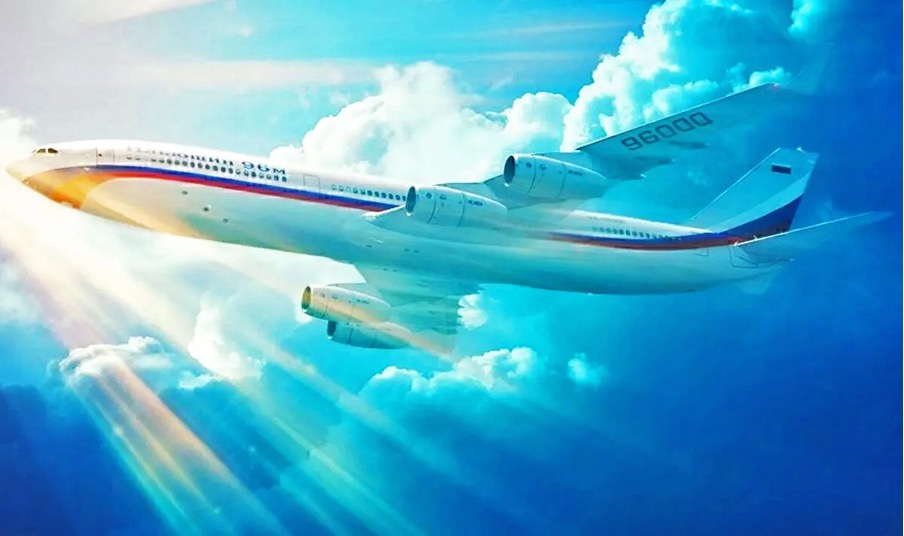 Ilyushin’s IL-96 long-haul widebody quadjet airliner has had an interesting lifespan since its first test flight in 1988. Since then, the commercial iterations of the aircraft have included the IL-96-300, as well as the IL-96M and the IL-96-400M – with the 400M variant being, as of yet, quite a bit less than successful. Despite its age, the IL-96 and its variants are still popular with Russian airlines (and Cubana) as commercial airliners, with the IL-96-300 being preferred. Featuring a standard two-class capacity of 262 passengers and 11,000km range, the 300 (along with another earlier IL-model, the IL-80) is also in service within the Russian government as a mobile command post. A highly customised version of the 300, known as the IL-96-300PU, is also serving as the lead aircraft in Special Flight Detachment ‘Rossiya’, tasked with transporting government VIPs.

Another notable aircraft is the IL-96M – a stretched version of the 300 – which features western-style avionics. Here’s where it gets a little confusing. The IL-96-400 and IL-96M are essentially the same aircraft, the only difference being that the 400 features Russian (not Western) avionics and engines. It has a max capacity of 436 passengers, and sports four adviadvigatel PS-90A1 turbofan engines (an updated version of the adviadvigatel PS-90A engines featured on the IL-96-300). The 400 was Russia’s answer to increased sanctions from the West, and the result of its desire to compete with Western companies like Boeing and Airbus. By reinvigorating an old Soviet beast with updated Russian technology, the country renounces its reliance on the flashy tech of the West.

Photograph of IL-96-300, courtesy of FlightGlobal.

The country’s increasingly frosty relationship with the West has also lead the Russian government to fall back on an airliner model they’re familiar with. Back in September, Russia’s first deputy minister for the military industrial complex, Yuri Borisov, confirmed plans to use taxpayers’ money to upgrade the existing 300 variants with new PD-35 turbofans, rather than purchasing more modern aircraft from Western companies. With Russia’s reinvigoration of an old Soviet airliner and its increased trepidation towards Western technology, one cannot help but draw strong parallels to the Cold War era. But I digress – with all that context out of the way, I can finally move on to talking about the planned IL-96-400M.

Back in 2018, Ilyushin revealed plans to work on a new widebody quadjet. Due to a combination of factors, including complications caused by the pandemic and a lack of interest from airline companies, the aircraft didn’t even make it into production. To make matters worse, the Kremlin had already injected 3.6 billion rubles into the project to kickstart it – that’s a lot of money for a plane that was doomed never to see the skies. One explanation for this move could be that, at the time, the joint Sino-Russian collaboration to build an aircraft known as the CRAIC CR929 was experiencing delays owing to disagreements on both sides. This project was to be seen as a competitor to the popular Boeing 777X and Airbus A350 airliners – however, Russia was hesitant to share its aerospace expertise only to potentially get shouldered out of the market by the rapidly developing Chinese industry. China, on the other hand, was reluctant to contribute to conceiving the aircraft only to have to purchase it from Russian airlines. Thus, the Kremlin decided to modify the IL-96-400T (a freighter variant of the IL-96-300 which Ilyushin had been developing) for passenger use until the project was completed.

Fast forward to this year, and the CR929 is currently in production, leaving the need for the 400M even more redundant than before. The project has since been cancelled, with only two prototypes ever being produced. Necessity breeds ingenuity, however, and the Russian government has now found a way to squeeze even more use out of the IL-96 line. The aforementioned ‘presidential fleet’ of IL-96-300s and IL-80s is getting on a bit. In the event of nuclear war, the last thing any VIP wants is for the plane they’re flying in to have some kind of malfunction owing to something as simple as ‘wear and tear’, sending them careening down into the irradiated wasteland below. Far from a distant possibility, this scenario is made likely by the rumour that some of the fleet have been rendered un-flyable due to their conditions. Allegedly, an individual even broke into one of the aircraft while it underwent maintenance at Taganrog Aviation Scientific-Technical Complex and stole hardware back in December of last year. With events like these highlighting the need for an upgrade, the 400M offers a solution, and also a way to semi-save face from the investment of such a hefty amount of taxpayer money into a non-starter project. The two 400M prototypes are set (after heavy customisation) to become both mobile command centres and transporters for Russian VIP’s. These new ‘Doomsday’ planes sport much needed improvements. The 400M’s “longer fuselage and more powerful PS-90A1 engines” (as stated by Ilyushin) will certainly allow for a longer range, and ideally, prevent any of those pesky malfunctions Russia’s VIP’s may have had to worry about with their ageing 300’s.