Home » Commercial » Scoot on Over to Singapore

Scoot on Over to Singapore Jobs

You may have heard of Scoot, the low-cost subsidiary of aviation giant Singapore Airlines. Something you might not be as familiar with, however, is the recent launch of their low-cost, long-haul route between London Gatwick and Singapore. Set to arrive next month, the new route will see passengers from London able to enjoy the relatively cheap prices (as low as £240 each way) Scoot has to offer on a rare opportunity to travel straight from the UK to Asia. ‘Why rare?’ I hear you ask. Well, that’s all down to profit margins. You see, the distances involved on your typical flight from our beloved United Kingdom to the East usually incur quite a hefty running cost for airlines. So much so that the majority of them tend to steer clear of offering this option for fear of little profit. However, Scoot seem confident they’ve found a solution to this. Demand may just be high enough for the route to make the budget airline a tidy little profit on the tri-weekly flights. It’s certainly true that the reluctance of other airlines to offer similar routes means there is a bit of a gap in the market for this service. On top of this, the yellow and white 737 widebodies picked to ferry Scoot’s passengers also serve as Singapore Airlines’ maiden entry into the UK market. Scoot’s chief executive officer, Campbell Wilson, certainly seems confident, describing the route as “the world’s best long-haul low-cost airline to London.” Definitely giving EasyJet a run for their money, then! 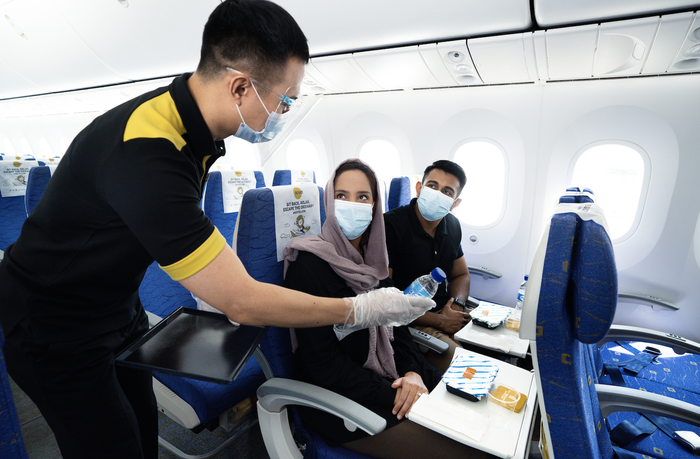 Other perks the airline looks to offer over competitors involve the ‘Scoot-in-silence’ option. This involves a section between the standard business and economy classes on the aircraft which offers a quieter flight experience (no children under 12, comfier seats and more legroom.) Passengers on the 16-and-a-half-hour flight between London and Singapore will certainly want to take advantage of this, offering the airline a cheeky way to make a few extra quid. Another factor to consider is that passengers looking for quarantine-free travel to Singapore may be out of luck. Those heading into London will have no trouble, but those heading the other way will have to book a separate Vaccinated Travel Lane flight, required by Singapore, like those offered by British Airways. So extra hassle for those on the departure leg, and trust me, quarantining is the last thing you want to do after such a long flight. There is, however, another benefit included in the flight route – the stop-over in Bangkok. The Thai capital is notoriously popular with backpackers, partygoers and those looking to ‘find themselves’. A low-cost tri-weekly flight to the gap year capital of the world is sure to appeal to a very large section of the British public. Before you get too excited, however, and start looking to live out that post-uni gap year that never quite materialised, it’s worth mentioning Scoot’s reputation. Consistency is important for an airline, and passengers want to know exactly what they’re shelling out for. Owing to this, Scoot’s wildly mixed reviews may prove to put a fair few potential travellers off the service. But, honestly, cheap is cheerful – just don’t be surprised if you get what you pay for!